5 Best Areas to Live in Seattle 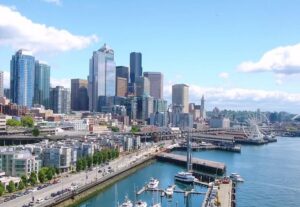 Moving to a new city or simply changing neighborhoods is always challenging. Seattle is consistently ranked among the best places to live in the United States, so we’re not at all surprised you want to move here. This is a city of neighborhoods, and each has its own unique character. If you have a hard time deciding on a neighborhood, take a look at the best areas to live in Seattle, as recommended by the locals.

Belltown is Seattle’s most densely populated neighborhood. Why? ause it’s a fun place to be! It’s considered the nightlife capital of the city, with numerous bards, trendy restaurants, and entertainment venues such as the legendary The Crocodile, where Nirvana once played. And not only is Belltown an extremely walkable place that you can easily explore on your own, but it also has excellent public transit.

The bad? Well, it’s also one of the most expensive areas for renting in Seattle, with rents averaging over $2,600 a month.

Located north of downtown Seattle, Fremont is the boho-chic area where art lovers will feel right at home. Indie shops, quirky outdoor sculptures, and hip bar await you. Fremont is sometimes referred to as “The Artists’ Republic of Fremont,” and was once a center of the counterculture. Landmarks include the Waiting for the Interurban sculpture, the Fremont Rocket, and the Fremont Troll sculpture.

The average rent for an apartment in Fremont is about $2,400 a month.

Another densely populated residential district, Capitol Hill is one of the most vibrant and fast-paced neighborhoods in Seattle. You won’t have any issues finding great nightlife and entertainment here. This lively community is made up of people of all ages, from young, single professionals to families with kids. It is also considered Seattle’s LGBTQ hub as well as one of its more culturally diverse districts.

The cost of rent in Capitol Hill is lower compared to other areas, averaging about $2,100 a month.

With roots as a Scandinavian seafaring village, Ballard is now one of the hippest destinations in Seattle. This neighborhood is getting bigger and the demographic is getting younger all the time. Ballard is home to Seattle who enjoy walks on the beach, mountain views, quiet places, but also trendy restaurants and bars. If that sounds great to you too, then Ballard may be the ideal neighborhood for you.

Located north of Greenwood Lake, this neighborhood is a great place to live for young families. it has the old Seattle vibe with a mix of turn-of-the-century homes and old condos but also newer townhouses. Greenwood is filled with numerous bars and family-friendly cafés where you can spend time with your loved ones. But if you want to head over to the downtown, you’re just a 15-minute drive away from the heart of the city.

And the best part? Greenwood averages under $1,800 a month for rents, which makes it one of the most affordable neighborhoods in Seattle.

Learn more about our services >>