The Ballard Neighborhood of Seattle

The original inhabitants of the Ballard neighborhood of Seattle, Washington were the Indigenous Duwamish people who enjoyed a prosperous life from the region’s plentiful clams and salmon. By the mid 19th century, however, their numbers had declined and the area began to be settled by Europeans.

Ballard initially was an independent city, founded in 1889, but was later annexed by Seattle on May 29, 1907. Many of Ballard’s early European settlers were from Scandinavia. Now Ballard is a neighborhood in the northwestern area of Seattle, defined by Crown Hill to the north, Greenwood, Phinney Ridge, and Fremont to the east, Lake Washington to the south, and Puget Sound’s Shilshole Bay in the west. Throughout the 20th century and continuing to the present, Ballard continues to experience prosperous growth and development.

Ballard is known for such delightful attractions as the Chittenden Locks (more often called the Ballard Locks, or just the Locks), the National Nordic Museum, the Shilshole Bay Marina, the Majestic Bay Theater, Sunset Park, and the Golden Gardens Park. With a nod to its Norwegian heritage, Ballard celebrates the Norwegian holiday of Syttende Mai with a big parade. 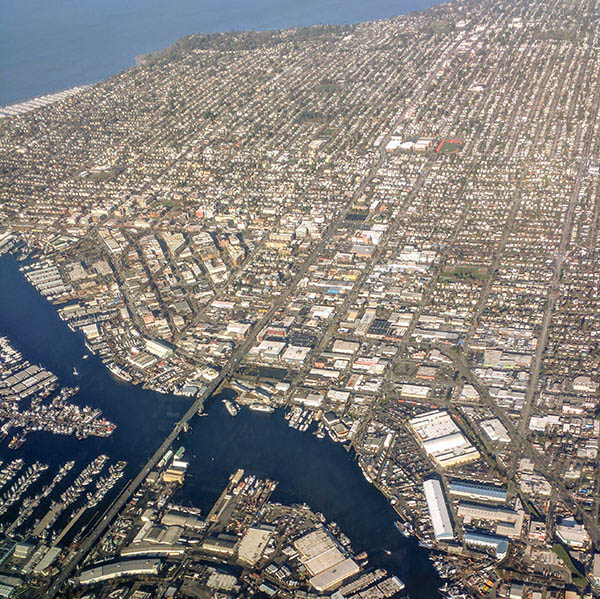 Ballard is also well known for its rich variety of restaurants and bars. The main throb of life radiates in the Ballard Old Town, along Market Street and Ballard Avenue. It is here where a wide range of shops, cafes, high-end restaurants, casual eateries, and micro-breweries can be found. If you want a good restaurant, check out The Walrus and Carpenter (famed for its oysters), La Carta de Oaxaca (for Mexican cuisine), The Bastille (for French cuisine), Jhanjay Vegetarian Thai Cuisine (for Thai cuisine), or Hattie’s Hat (great for burgers and fries, and beer). Good bars would include Percy’s & Co., Hazelwood, Olaf’s, or King’s Hardware. Specific micro-breweries would include Stoup Brewery, Peddler Brewery, and the Maritime Pacific Brewery. If you’re looking for a crafted coffee beverage, there of course is Starbucks, but also check out Cafe’ Fiore, Bauhaus Strong Coffee, and Ship and Ship.

Ballard has a lot to offer to both residents and visitors. It would not be difficult to spend an entire day – or two – seeing the sights, enjoying the variety of restaurants, and generally enjoying the flavor of this truly unique Seattle neighborhood.

Ballard is an area we service