The West Seattle Neighborhood of Seattle

West Seattle is known for its scenic views, laid-back vibe, and boardwalk beaches.

The community
The West Seattle community is composed primarily of retirees, yuppies, and growing families. It is a wonderful place to grow old and raise a family because of the easy access to parks, activities, and nature. Residents report that the community overall is quite relaxing because of the safe environment. You can sleep soundly at night with the sounds of nightlife.

The commute
If you’re commuting or working every day in central Seattle, you should give yourself an early start from home because of the rush-hour traffic on the roads and on the West Seattle Bridge.

You can also take the commuter buses which are fast, efficient, and convenient.

West Seattle though offers a unique way of getting to Downtown Seattle if you want to beat the usual traffic commute: the water taxi. Hop on the King County Water Taxi from Seacrest Port for a convenient, breezy 15-minute ride with the sights of the ocean. 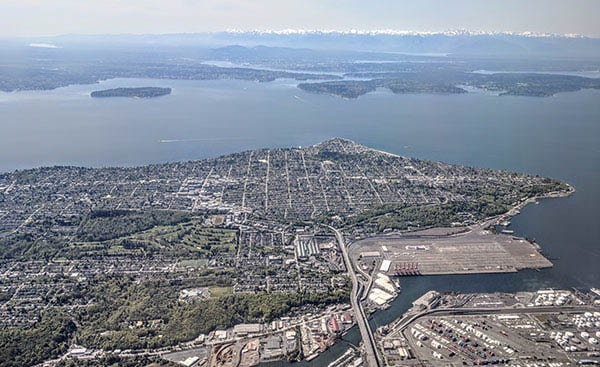 The views
One of the perks of being in West Seattle is the front-seat views of the Emerald City. West Seattle offers the best vantage points of the city, the mountains, and the sea. To the west is a view of the Olympic Mountains while to the east is the Cascade Range. You can also head to Alki Beach Park or Lincoln Park around dusk and take in the beauty of Elliott Bay.

The food
There are plenty of dining options in West Seattle that are guaranteed to satiate your cravings.

There are restaurants that specialize in ethnic cuisines like Japanese, Indian, Hawaiian, Italian, or Korean. There are the Chinese-American dishes at the New Luck Toy. There are two Hawaiian-fusion restos in this neighborhood: the Ma’ono and the Marination Ma Kai at the waterfront. If you’re in the mood for Italian dishes, make a reservation at the popular Raccolto or at the new Il Nido.

Grab a morning cup at the beachside in Ampersand Cafe on Alki Beach Park. For pastry goodness, head to Bakery Nouveau or to A La Mode Pies for a slice of pie heaven. There’s also The Swinery is both a deli and a butcher shop. For those taking the ferry, grab a roast beef from the Wildwood Market on Vashon Island before you ride. Vegans can dine in Chaco Canyon Organic Cafe for healthy options. Husky Deli offers frozen delights of house-made ice cream flavors, like rum truffle or French orange. For a good nightcap, there’s the speakeasy, The Alley, behind Be’s Restaurant.

West Seattle is an area we service